Interest rates continue to be very attractive…in the 4’s to low 5’s depending on loan amount, loan-to-value, purpose of loan, and credit scores. But they have nowhere to go but up, and the market reacted poorly this week to the news that the government is definitely ending the purchase program for mortgage-backed securities as of March 31, 2010.

Speaking of credit scores, I have seen a number of credit reports recently where my client’s scores were hurt because they had closed credit card accounts. They THOUGHT they were doing the right thing, but they inadvertently hurt themselves. If you pay off a credit card, it isn’t smart to close the account. Keep it open, with a zero balance, and use it once every few months for minimal purchases such as gas or food, and pay it off. In this fashion you are increasing the credit “available” to you, but not using it. The goal is to have all balances on revolving credit at or below 30% of total credit available. High balances to total credit available are the primary culprit in driving down FICO scores, right behind collections or delinquent payments.

Interest rates today are very sensitive to FICO scores, and you will pay a price for any score below 720, and in some cases with larger loan amounts, scores below 740. It is tough out there!

Sales stats for Orange County show that home sales at the “low end” of the housing market – below $500,000 – consisted primarily of foreclosures and short sales, and accounted for all of the sales gains (increases in volume) seen in the last year.

The median sale price for single family homes in Orange County was $496,070 in December. Newport Beach posted a median price of $938,500 and Laguna Beach was at $1.23 million. The sales at the higher end of the spectrum, although much lower in volume, still helped to push the median prices up.

The recent terrorist attempt on a Northwest flight bound for Detroit hit close to home for me. My daughter, who lives in Ann Arbor, Michigan, was in Europe at the time and heading for Amsterdam where the fateful flight originated. Further, she was flying home to Detroit after the holidays.

So, what are the real chances of being involved in a terrorist event on an airplane? In the decade of the 2000’s, the only American fatalities occurred on 9/11, and including those stats, only one passenger in every 25 million was killed in a terrorist attack on an American airplane during the past ten years.

Contrast that with the chance of being hit by lightening…one in 500,000 each year. Further, the stats show that these violent passenger incidents –bombing, hijacking or sabotage- were five times less common in the 2000’s than in any decade from the 40’s through the 80’s. Source: Nate Silver http://www.FiveThirtyEight.com.

Mr. Silver opines that we would be more rational to focus on prevention of a nuclear terrorist attack that could affect millions.

So the bottom line, as I always reminded my children, is to be far more worried and cautious when driving your car than flying. And don’t stand under trees in a lightening storm!
Posted by Karen Card at 3:56 PM 2 comments:

Five year fixed rates are still at or below 4% for loans up to $729,000. The CPI figures that came out at the end of the week were lower than expected, helping keep interest rates down, and the government spending spree for mortgage backed securities is also providing assistance.

However, keep in mind these rates won’t last since we have repeatedly been reminded that the mortgage-back securities buying program will end by the end of the first quarter this year. In addition, as soon as inflation raises its ugly head it will bode ill for interest rates.

My prescription for the end-of-the-holidays blues is great food, wine and music.

On a recent Sunday afternoon we drove to downtown San Clemente and strolled the length of Del Mar for some window shopping. Yes, we bought some touristy gift-cards too! We headed for the San Clemente Wine Company to check it out after reading a few reviews in the local newspaper. This wine shop offers a comfortable tasting area in the back of the store, where for $15 you can taste a flight of 6 wines. We had cheese, crackers and some great reds…Pinot Noirs, Cabs, and Syrahs.

The SC Wine company specializes in moderately-priced wines from California, Australia and New Zealand. The owners are currently visiting in New Zealand to locate new wines for the shop. They regularly host vintners for special tasting events, and are open 7 days a week.

Next on my “fight the blues” list is Iva Lee’s restaurant, on Camino Capistrano in San Clemente. Offering outrageously good food and music, the theme is southern-style N’awlins all the way. Gumbo, catfish, fried green tomatoes, sweet potato fries and the like are all on the menu. Blues is the obvious music of choice, and we were lucky to catch the Blue Machine Band. They play regularly on Thursdays at Iva Lee’s but also appear in other Orange county venues.

If you love Blues and Cajun cooking, you can’t miss Iva Lee’s.
The restaurant was busy for a Thursday night, so call for a reservation. After it cleared out a bit, we took advantage and danced in the dining room near our table, and in the bar. Weekend crowds might make that a bit difficult however.

Last, but not least, we dined with friends at Bistango, an old favorite in Irvine near the airport. We were celebrating three birthdays, and as always the food was outstanding and the dancing was a blast. Bistango has live music every night, with a real live dance floor. We appreciated not only the cuisine, but the art as well, which is inspiring (at least inspiring for artists like the one I live with.) Definitely my special occasion choice!

I think I have beaten the blues. Now if only the hurricane will stop so I can go outside again!

Posted by Karen Card at 3:44 PM No comments: 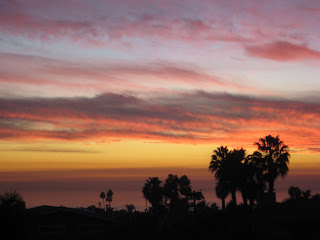 I took this photo in late December from our balcony in Capo Beach. The sunset is over the ocean, looking towards San Clemente Island and the southern tip of Catalina, and was one of the most spectacular we've seen!
Posted by Karen Card at 3:39 PM No comments:

The latest vacancy rates, 8% nationwide, reflect that the U.S. is a renter’s market. Rental vacancy rates are at a 30 year high, primarily due to the economy, but also due to competition from a wave of new supply that hit the market last year. The oversupply came from a lot of condo projects gone bad, that had to be converted into rental property.

If you are renting, now might be a good time to renegotiate your lease. Many landlords are offering enticements to tenants to renew.

Orange County is number seven on the list of biggest rent declines in the country, behind San Jose, Seattle, San Francisco, Las Vegas, New York and LA. Our decline in rental rates is just under 5%.

Thanks to falling home prices, and record low mortgage rates, it now costs less in most markets to own than over the last decade, on a mortgage-payment-to-rent-payment basis. Of course, this doesn’t take into account the down payment required for ownership.

Remember-- the Homebuyer Tax Credit currently expires in June of 2010, and must be under purchase contract by April 30th to qualify. I understand the State is considering a renewal of a statewide tax credit that may pick up the slack, at least here in California. That is, if they don’t run out of money like they did last time!
Posted by Karen Card at 5:21 PM No comments:

My son Kenny has designed a greenhouse for his college, Marlboro, located in Vermont.

He plans to start building in the spring--once the snow thaws and the building permits are approved by the local jurisdiction.

When it is complete, the college will be able to grow produce for their cafeteria year round, instead of just during the spring-summer-fall season.

Here is a link to his design on YouTube, or you can find it yourself on YouTube by searching for Marlboro Greenhouse.

greenhouse
Posted by Karen Card at 12:18 PM No comments:

Foothill was joined by Beckman High in the Tustin School District, and was honored among a total of 24 high schools in Orange County.

To check out the entire list, go to http://www.usnews.com/sections/education/high-schools.

There were 1750 schools recognized nationwide in all categories--Gold, Silver, Bronze and Honorable Mention.