We’re having a heat wave here in Orange County, both in terms of weather and rates!

All rates quoted assume a one point origination fee plus closing costs, and are subject to FICO scores, loan-to-value, loan amount, property type, and occupancy.

Summer has finally arrived in Orange County--now that it’s almost over! The rest of the country has been sweltering for some time, while we were still wearing sweaters. Hopefully temperatures will remain warm at the beach through September. I was awakened last week by the fog horn in Dana Point Harbor which was a first for the summer months!

My daughter Katie has been visiting most of this month, and we stopped at Sunsets in Capo Beach on PCH on our way home Sunday. They have live music playing on their outdoor patio--with a front seat view of the ocean--every Sunday afternoon, which adds a lot of fun. This is my new favorite haunt for Sunday afternoons in South County. They usually host a big crowd of locals on Friday and Saturday nights though, complete with DJ and dancing-- for all ages. www.sunsetsbar.com

I spent five days mid-month at Rock Creek Lake in the Eastern High Sierra. (elevation 10,000 feet) My mother, who began visiting Rock Creek Canyon around 1949 joined me, along with my daughter and sister. Girls’ trip! We hiked, fished (yes we caught and ate trout) and played a lot of cards. One night we ventured out to dinner at the Convict Lake Restaurant outside Mammoth, and had a fabulous meal. Rock Creek is a very special place that I’ve been visiting since I was 3 or thereabouts (my mother claims I went there the first time when she was pregnant with me). This is where I learned to ride horses and fish. I’ve joined the pack station in the past for the fall horse drive which is a four-day endurance event driving stock down the Owens’ River Valley to Independence. For more information go to: www.rockcreeklake.com or www.rockcreekpackstation.com
Posted by Karen Card at 12:04 PM No comments: 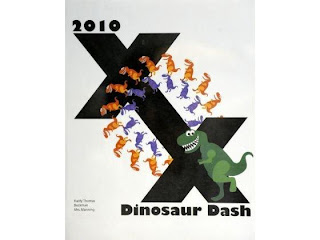 This November 7th is the 20th anniversary of the Dinosaur Dash, a running event and fundraiser for the Tustin Public Schools Foundation (TPSF). It is held annually at the Tustin MarketPlace. More than 10,000 people attend each year, including volunteers and participants. This year’s Dino Dash has added a cycling tour in addition to the 10K, 5K and 2K “fun run.” Each year the logo is selected in a contest among Tustin student entries.

Last year’s Dash earned $125,000 for the District’s student and teacher support through event registrations and sponsorships. The prior year, in a better economic environment, they raised $170,000. To give some perspective, TPSF has donated over $2.3 million to the school district over the past twenty years--from all income sources—including the Dinosaur Dash.

TPSF is seeking residents who participated in the inaugural Dash to share their memories, so here goes!

I was a founding Board Member of the Foundation, and was Chair of the Inaugural Dino Dash. As Fundraiser chair on the Board, I was given the responsibility by the Board to create an annual event that would involve the entire community in an effort to support our schools.

We decided on a running event, interviewed race directors, and hired Herb Massinger of Race Pace. Hence the Dino Dash was born. I remember how hard it was initially to obtain the Board’s approval to proceed…I practically had to twist their arms and stand on my head…but finally received the go-ahead.

We held weekly meetings for what seemed months at my home with the race director and race volunteers to organize the event. The first year was tough going, and we finished with something like a meager $5000 net profit. We had big goals though, and were optimistic that the event would build over time. Of course optimism is my middle name!

I remember that Linda Jennings and I met with the General manager of Tustin Lexus, who agreed to be our Major Sponsor… and we were off and running! The first year ALMOST everything on the day of the event came off without a hitch, although the weather was cold and windy that first Sunday. I have photos of my children, who were quite young then, wearing ear muffs and jackets.

Every Board member worked the event…and we also had lots of community and school volunteers. We decided to invite local Olympians to sign autographs for young and old athletes, with the help of our own home-grown Olympians who had children in our school district. My good friend Dana Schoenfeld Reyes (Breastroke, Silver, Munich ’72) put us in touch with most of them including a number of swimmers, triathletes, runners, and more.

The event has morphed and changed over the years with all kinds of related activities: A food court, games, community booths, costume contests, contests between schools for registration, and more.

The Foundation offers grants to teachers throughout the district, sponsors a Teacher of the Year event, teacher training, scholarships for college-bound students, books, technology, a Go Green Initiative, and tutoring.

To this day one of my most treasured possessions is the baby dinosaur hatching from an egg that was presented to me for “hatching” the Dinosaur Dash. It was a difficult birth but well worth it!

for more information on Dino Dash XX or to register, go to: http://www.tpsf.net/dash.htm
Posted by Karen Card at 1:07 PM No comments: