Market Update...& The Battle of the Paddle

Rates are still hovering right around their record lows. If you can qualify, and your property appraises out, you can get a rate in the 3’s to low 4’s depending on your loan size and the term. Money is cheap, but is still relatively hard to qualify for in terms of documentation required!

Underwriting guidelines continue to contract, and seem to take the heaviest toll on self-employeds – for whom two years’ tax returns and YTD P& L’s are the norm. Investors don’t want to take any chances on any file, lest they be forced to “buy back” the loan at a later date…which is happening right now with hundreds of thousands of loans that went into default. Oftentimes these defaults aren’t the fault of the original mortgage lender, but are due to loss of income or other related effects from the economy, but banks as well as Fannie and Freddie are enforcing their “buy back” provisions in the contracts they have with mortgage bankers. This is why so many mortgage banks are out of business – the tremendous liability they face to buy back defaulted loans.

Battle of the Paddle

We rode our bikes down to Doheny State Beach a few Sundays ago, before the onset of rainy weather. We often jump on our bikes for a little “road riding” on weekends. Last month we rode down to San Onofre State Beach to check out the sharks we’d read about at Trail One. Alas we saw none!

This trip we planned to witness day two of the Battle of the Paddle, the largest SUP (Stand Up Paddle) competition in the world. In case you haven’t heard of this, the sport involves standing up on a large surf-type board--while using a paddle to move forward. Lots of people are doing it in harbors and in the ocean for exercise, to surf, or just to “get around.”

We hoped to watch our friend Jerry Meador. He is an old friend of mine from high school. I literally hadn’t seen him for about 40 years, YIKES!

Jerry was competing in a couple of different events, and we watched the “relay” event which was really fun. Each team had four members --with at least one woman. They had to paddle out through the surf, rounding two buoys, ride waves and/or paddle back in, and run up the sand to a spot on the beach where their teammate waited to take off next. They all had to paddle the route twice, and there were some pretty funny crashes, near misses, etc. since there were competitors both coming in and heading out at the same time --after the start of the race.

The waves got bigger in the middle of the event with some pretty nice sets coming in. Some paddlers handled the waves well and others…well, wiped out! It definitely separated the surfers from the non-surfers, albeit on super large SUP boards.

I learned there are all different kinds of SUP boards…some are more like regular long surfboards. I also found out that people of all ages can do this.

The oldest participant, who won for his age class, was on my friend Jerry’s team and is 72. They also had a team member who is a pro surfer—Leah Dawson—who is ranked as one of the top female long boarders in the world. She was fun to meet…friendly and down-to-earth. When I met her I asked her where she was from, and she replied, “Heaven. I live in Hawaii…” with a big smile on her face! Jerry had sort of arranged for a ringer on his team since his daughter Kassia is also a pro surfer.

Steve and I can’t wait to try it next, in the Harbor where there are no waves!
Posted by Karen Card at 4:18 PM No comments:

Last Monday evening we had to sleep in our living room under the ceiling fan, with the French doors open to the ocean breeze to escape the heat! I really enjoyed the rest of the heat last week though. This morning I woke up to rain…what is going on with our weather?

Remember rates and fees/costs depend on occupancy, property type, loan-to-value and credit scores. The rates shown above all assume a one point origination fee plus costs, but may be more or less depending on loan size.

I had to bid adieu to my son Kenny who left Saturday afternoon for the Brandenburg University of Technology to study Architecture in a Graduate school program. His program is located in Cottbus, but they will be traveling to a number of different locations in Europe during his two years there! He was accepted less than two weeks ago, so it was a hectic time for him to say the least. He drove cross-country with all his belongings from Vermont, stopping to visit his sister Katie in Ann Arbor, and in Boulder to see old friends on his way.

After a brief two days here in the OC, he flew to Berlin and arrived Sunday evening, when he took a train to meet new university friends. His biggest packing challenges were whether to bring his tripod for his video camera, and which books to discard.

I hope he enjoys the food there…I was expecting Kenny on a trip through Germany in 1986, and to this day just the thought, much less the smell of sausage and sauerkraut makes me nauseous. 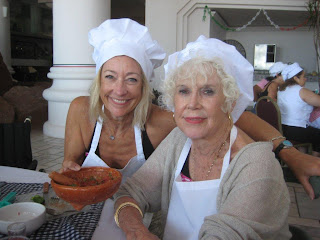 I learned of his university acceptance while on a Mexican Riviera cruise with my mother, who celebrated her 85th birthday on-board. We had a wonderful and relaxing trip complete with lovely dinners, and made new friends from Great Britain who sat at our dining table. We really enjoyed the Salsa & Salsa excursion in Mazatlan where we learned to make authentic Mexican salsas, guacamole, and margaritas AND learned to dance the salsa. (Well, mom didn’t dance, but I took a brief lesson) You can find out more about the classes with Two Dancing Chefs on www.salsaandsalsa.com . They have just opened classes at another venue in Cozumel. They are also on Facebook under Salsa Mazatlan Mexico.

Our Cruise was with Carnival and they did a great job, so I’d highly recommend them. Waiting until September we didn’t have many children on-board, but there were adults of all ages-- which was nice. My mother played in a bridge tournament during our days at sea which kept her busy and I kept her busy in-port at Puerto Vallarta and Mazatlan.

More next time on the Battle of the Paddles...
Posted by Karen Card at 3:02 PM No comments: